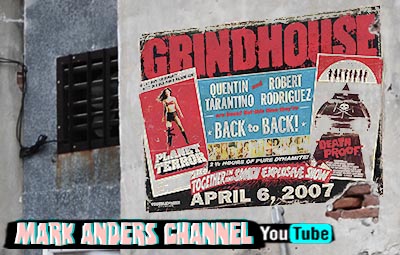 Low budget 1970s films have become more widely known as “grindhouse” films since the release of the Tarantino/Rodriguez movie Grindhouse which was released theatrically as a Death Proof/Planet Terror double feature with added fictitious exploitation movie trailers by other directors including Rob Zombie and Eli Roth. I’ve seen a lot of 1960s and onward “exploitation” movies but I had never once heard them referred to as “grindhouse films” until the 2007 release of Grindhouse. I’d heard the terms exploitation-film, B-movie, low-budget movie, drive-in movie, Roger Corman movie, cult film or even specific genre terms like Mondo, sexploitation, ozploitation, or biker films, but, at least to me, the term “grindhouse” as it relates to low budget films exploiting lurid subject matters, was brought to the public attention at large by Tarantino and Rodriguez. Grindhouse as defined according to Wikipedia:

A grindhouse is an American term for a theater that mainly shows exploitation films. According to historian David Church, this theater type was named after the “grind policy,” a film-programming strategy dating back to the early 1920s, which offered continuous showings of films at cut-rate ticket prices that typically rose over the course of each day. This exhibition practice was markedly different from the era’s more common exhibition practice of fewer shows per day and graduated pricing for different seating sections of large urban theaters.

Due to their associations with attracting a lower class of audience member, theaters operating on grind policies gradually became seen as disreputable places showing disreputable films, regardless of the sheer variety of films (including subsequent-run Hollywood films) that they showed.

Due to these theaters’ proximity to controversially sexualized forms of entertainment like burlesque, the term “grindhouse” has often been erroneously associated with the burlesque theaters located in urban entertainment areas like 42nd Street in New York City, where ‘bump n’ grind’ dancing and striptease were featured.

Whether the term is grindhouse, exploitation, or low budget 70s-style film, Deadbeat at Dawn(1988) fits squarely in that category and writer, director, and actor Jim Van Bebber is the quintessential rebel low budget action movie maker. Deadbeat at Dawn is a revenge story about a gang leader who calls it quits for the sake of his girlfriend, who is killed by a rival gang shortly thereafter. The trailer doesn’t tell a whole lot about the story line but it held my attention, had some decent stunts and camera work, and didn’t pull any punches in it’s graphicness. It’s also what prompted me to find out more about the Van Bebber and his other movies. If you want to get a sense of the director check out this interview(dead link removed) from the Uk series Shock Massacre which features Van Bebber and Sage Stallone(1976-2012), Sylvester Stallone’s son, who was clearly into exploitation films. (EDIT: Its hard to keep up with youtube pulling people’s videos or people taking their videos down. Check out this interview instead.) In 1996, Sage Stallone co-founded Los Angeles-based Grindhouse Releasing(they knew the term 11 years prior to 2007’s Grindhouse) with film editor Bob Murawski. Grindhouse Releasing is “dedicated to the restoration and preservation of exploitation films and B-movies” and you can check out their website here. Jim Van Bebber has ten IMDB credits as a director of mostly short films and has acted in 19 films, including most of his own.

Deadbeat At Dawn is available as a DVD rental on Netflix.

Now that I have actually seen Deadbeat At Dawn I must say that its quite remarkable that Jim Van Bebber, in his early 20s, had the discipline to write and direct this 80 minute movie. The DVD extras show the production crew’s work ethic and some of their tribulations, like accidentally ruining a whole reel of film containing a day’s footage. In interviews, Jim Van Bebber comes across as a heavy drinking rebel, and he may be, but to make Deadbeat At Dawn at such an early age showed a lot of talent, hard work, and potential. He seems to have made very few films and several shorts but nothing too substantial since 1988, which is a shame. There is no reason why Van Bebber couldn’t have been making a full length movie every couple of years and be a very polished in-demand director by now. There’s no reason why he still can’t be cranking out full length features. Okay, so there are much fewer independent theaters and almost no drive-ins, but there’s the internet, Netflix, plenty of cable channels, DVD distribution, etc… It seems a real shame that someone like Jim Van Bebber can’t be a bigtime working director. Maybe there will be more venues in the near future where independent directors can release their movies, get paid well, and move on to their next project without being excluded because they didn’t make a movie that was released by the major theater chain monopolies.

Ondata di piacere Wave of lust Ruggero Deodato… by FILMandCLIPS Waves of Lust(1975) is worth a watch. Its an Italian production with a Purple Noon feel to it. Directed by Ruggero Deodato(Cannibal Holocaust). Jurassic Gorilla, […]

Plunder Road is a low budget but well crafted film noir movie about five guys who pull off a gold heist and their subsequent getaway. The one thing you can count on in almost any […]