From Tony Rome to Dirty Harry?

Tony Rome, 1967, is one of Frank Sinatra’s late 1960s neo-noir movies which also include the sequel Lady in Cement and a crime drama called The Detective. Scroll below the gallery for the trailer or click here. Sinatra was one of many actors offered the role of Dirty Harry but Sinatra had actually accepted the role but later bowed out when a hand injury he received eight years earlier while filming a fight scene in The Manchurian Candidate started acting up thereby limiting his ability to hold a gun, which was essential to the 44 magnum wielding character. Check out the Manchurian Candidate fight scene here. I don’t know if they included the exact moment Sinatra broke his hand in the movie. He supposedly broke his hand hitting a table. The table he hits in the clip below looks like a breakaway prop. You can see how Sinatra might have looked as Dirty Harry in this studio promo. Among the actors who turned down the role prior to the casting of Eastwood were Burt Lancaster, John Wayne, Steve McQueen, Robert Mitchum and Paul Newman. Do you think any of these actors could have out-Dirty Harried Clint Eastwood? 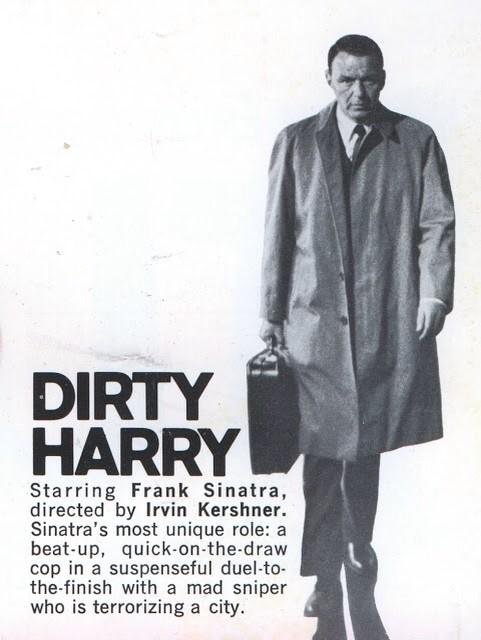 Lady in Cement, Fun but Confusing Lady in Cement(1968), starring Frank Sinatra, has a nice, politically incorrect 1960’s Florida crime novel feel to it. It co-stars one of my favorite actresses, Raquel Welch, and Bonanza’s Dan Blocker, […]

Ondata di piacere Wave of lust Ruggero Deodato… by FILMandCLIPS Waves of Lust(1975) is worth a watch. Its an Italian production with a Purple Noon feel to it. Directed by Ruggero Deodato(Cannibal Holocaust). Jurassic Gorilla, […]