Titanoboa is an extinct genus of snakes that is known to have lived in present-day La Guajira in northern Colombia. Fossils of Titanoboa have been found in the Cerrejón Formation, and date to around 58 to 60 million years ago. The giant snake lived during the Middle to Late Paleocene epoch,a 10-million-year period immediately following the Cretaceous-Paleogene extinction event. The only known species is Titanoboa cerrejonensis, the largest snake ever discovered, which supplanted the previous record holder, Gigantophis. 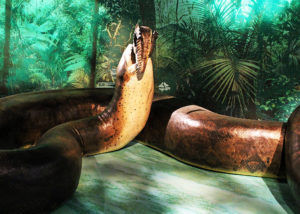 The Biggest Snake in the World

It’s our most viewed video at over 24 million views. Many consider Mark Anders’ The Biggest Snake in the World to be a good luck or good karma video. They watch it from time to time, […]

The Minhocão According to natives in Central and South America, the Minhocão is a 20 to 50 meter long black scaly serpent or worm living in the forests. They believe it to be a burrowing creature […]